Richard Purnell Reflects on Furniture Delivery in a Changing World 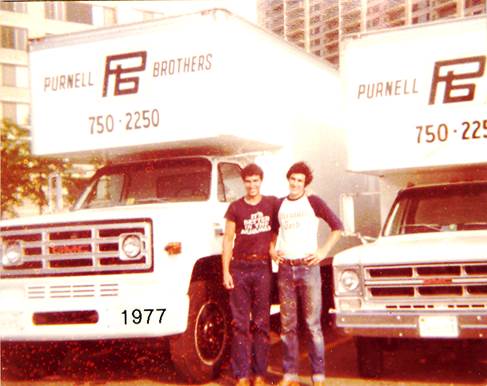 As a teen, Richard would help his dad out after school at the family’s Falls Church, VA, furniture store, Hutchison Furniture. The furniture business in the U.S. at the time was comprised mainly of small, local furniture stores. “People bought local. Furniture stores would do their own deliveries, with their own trucks and drivers,” says Richard. “Prior to the 1980s, third party providers were a relatively new concept. Furniture stores were enjoying rather high margins, so they could afford to do it themselves.”

A twist of fate led Richard and his older brother, Elmer, to start a small furniture delivery service with a truck they received from their father. “We were in high school at the time. My father lost the lease on the building where the store had been located for 20 years, leading him to go out of business and retire,” says Richard. “I learned from this experience that real estate is an important part of business. Because my dad didn’t own the building, it put him out of business.”

Richard and his brother made furniture deliveries for interior designers and local furniture stores. Their business grew, and they began running three trucks a day, then five trucks. Elmer went away to college, and Richard dreamed of becoming a finance major and college basketball player. But the business was beginning to take off. He made the decision to get an extension from the university at which he had been accepted, and gave up on the going away to college dream. “It was time to make this thing we created a real business,” said Richard.

His sister, Linda Lee, joined the company, and they began to make deliveries out of other retailers’ stores. They also built their own warehouse in 1984. “Around this time, stores had inventory and less warehouse space. Their thinking? Let the manufacturer hold it.”

But an evolution was taking place. “Baby boomers were buying homes,” said Richard. “National companies were entering the fray. Catalog showrooms were popping up — and so were lower prices.” He added: “When discounting started, things started to change. In order to compete, the small guys had to look at their distribution costs for the first time. This is where we came in — we took the delivery headache away, because we could take over their trucks and flex as volume required.”

It was a contract with Crate and Barrel that would be the catalyst for changing the trajectory of Purnell Furniture  Services. They were humming along as a regional provider in D.C. and Baltimore, doing a great job for their clients, but Crate and Barrel wanted more. “They needed us to take on Atlanta and Dallas, too. That meant we would need to have multiple locations in different cities. “Big step,” says Richard. “But we did it.”

Purnell Furniture Services was now running deliveries out of client businesses, making deliveries off their docks — dedicated and full-service warehouse and delivery. For the retailer, it was now economical to use a third party delivery service.

For the next three decades, the Purnells would grow their business geographically out of the Washington, D.C./Baltimore markets and become a formidable regional provider in the mid-Atlantic and Southeast Corridor. Eventually, they would build their business to 125 trucks out of 12 locations.

“We didn’t see the impact imports would have on our business,” says Richard. “This furniture came knocked down, packed efficiently in containers, requiring assembly at the warehouse.” For third party providers, assembly became a bigger piece of their service offerings. “Now we had to build furniture at the warehouse,” added Richard. “It would come in boxes — maybe six chairs in a box. It could take up to 20 minutes a chair to assemble.”

“It’s a much more sophisticated business today,” says Purnell. “The focus is on supply chain efficiency, fewer partners and a national footprint. And technology is absolutely required to do the business.” For Purnell Furniture Services, it become too costly a proposition to catch up, and so they agreed to be acquired by FIDELITONE in late 2012. Among the advantages for clients was the fact that FIDELITONE could scale quickly, grow markets fast for customers. “We could now say ‘yes’ to clients when they asked us to take on business beyond the East Coast.”

“Today, it’s about squeezing out costs. The consumer is used to getting things fast.” And what about furniture buying? “It’s more fashion oriented. When we started, furniture was about acquiring heirloom pieces and passing it down through generations. Consumers today will buy an orange couch — until they want a blue one. To earn and keep their loyalty, you better stay on top of everything they expect.”